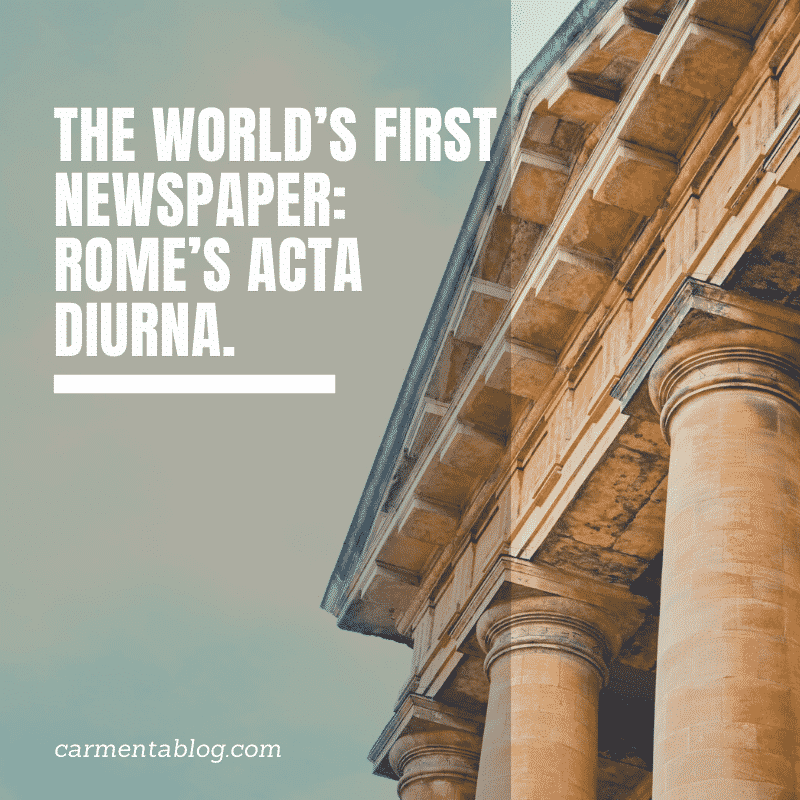 The term “newspaper” is an antiquated word, but it has a very specific origin. In Rome, during the reign of Augustus Caesar (27 BC – 14 AD), there existed a program called Acta Diurna or Daily Events. This was the world’s first newspaper. It consisted of summaries and reports from around the Roman Empire. The acta were not published every day; sometimes they appeared once or twice per week and at other times as much as four times per day when news was current and urgent!

Most important facts about Acta Diurna

-Augustus Caesar created Acta Diurna as a way to keep Roman citizens up on events around the empire, and sometimes published it four times per day when news was current and urgent.

-Caesar realized that information is power and manipulated public opinion through early forms of mass media, better known as Journalism

The Romans were the inventors of many things still in use today: roads and highways, sewage systems, etc. But did you know that they also pioneered modern-day journalism? That’s right! The editor of world’s first newspaper was none other than Caius Julius Caesar who realized that information is power. He used this knowledge to create an outlet for his political ideas while manipulating public opinion through early forms of mass media – better known as Journalism.

The Acta Diurna, which means “daily acts” in the same way that the word ‘journal’ is derived from the French word for day (‘jour’), was originally meant to be a communication tool solely between high-ranking Roman civil servants and judges. However, Caesar saw this as an opportunity to reach out more directly with his message of conquering Gaul – he made it available not only to these important people but also offered copies publicly so everyone could see how great Rome’s empire ( “when did Rome become an empire

Acta Diurna an innovation that has survived to this day

The Romans were innovative when it came to distributing information. The Acta, which included the latest news and laws from Rome, was posted on walls so that everyone could read them as they went about their daily business. They also had an organized system for speedy transmission of messages through a post office called cursus publicus and even used carrier pigeons!

In his bid for power, Caesar disobeyed the Senate and went on a campaign in Gaul without their approval. This resulted in public opinion being divided as to whether he was evil or good. Pompey insisted that Caesar be placed under arrest because of this disobedience but it is unclear what motivated him other than wanting more control over Rome’s government affairs.

After the Civil War, people would gather in Rome to read about recent events like gladiatorial games and government decisions. They were posted on tabulae (posters) that could be seen all over the Roman Forum for everyone’s enjoyment. Some of these historians include Suetonius and Tacitus who used Acta Diurnia as a main source when writing their histories.

The Acta Diurna continued to be published for centuries, right up until the seat of the empire was transferred to Constantinople. It is hard to imagine a more important medium in Roman life than this one!